We have been vaccinated for Covid.  We are now booking for 2022 and beyond.

Give your attendees a reason to Stay Longer at your Con or Event!

We have shows for your Comic Con, Harry Potter Inspired Event or Doctor Who Con.

We have Four different themed shows: All are comedy shows first with pop culture themes.

NEW SHOW !  THE MAGIC OF LOKI

Everyone’s favorite Anti-Hero is here with a new show

Variant President Loki from the Disney + series is here to hold a campaign rally and Entertain the crowd. See him do magic with swords, daggers, spikes, and  Pomeranian Loki.  Debuted to a  smashing success at Granite State Comic-Con 2021. 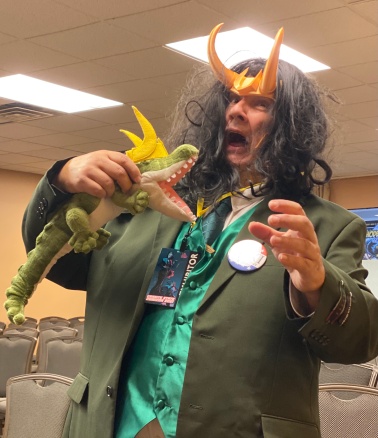 The Original Comedy and Pop Culture. A multi-fandom show with Doc Brown/Indiana Jones, The Shark from Jaws, Yoda and the Slightly Evil Dead.  We can mix in Dr Who and Potter characters to this show if it is the only show we are doing at your con. 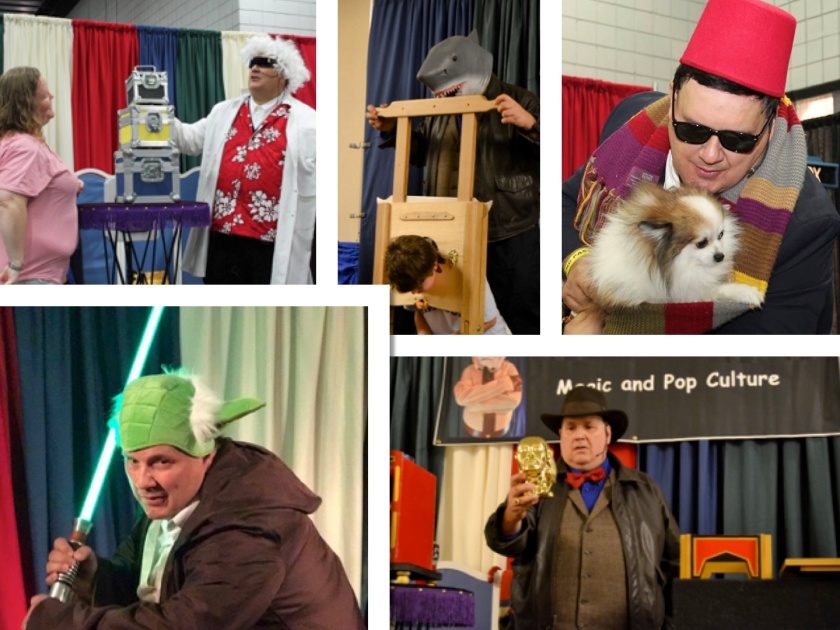 These are completely new Comedy shows unlike anything you will see anywhere on the planet.  I combine my love of Nerd Culture with Comedy and with Magic.  It is really a Comedy show about Pop Culture, Potter Or Dr Who that just happens to feature magic and illusion. It is designed for Comic Cons and Pop Culture Events but also can be performed at Corporate Events. We can perform one of the shows or different shows during your event. 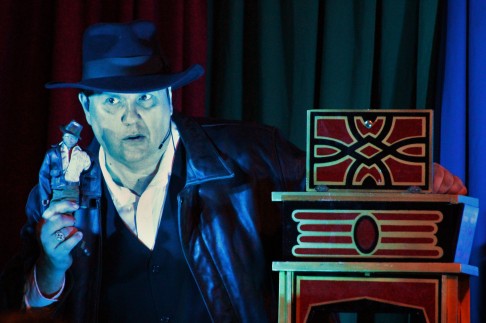 Every show is full of Comedy and Magic and Safe Interaction with the Audience.

Other shows are explained in the menu.

Mark Pinksten traveled around the country in the late 1990’s and early 2000’s with his solo National Mall Tour show..  He has performed as a comedian and comedy magician, His AllStar Comedy Revue played state fairs and large venues. He retired from performing in 2002 and came back in 2016 with Comedy and Pop Culture. In his day job, Mark travels the world as one of the leading Computer Security Experts in the world. He has trained people from Homeland Security, CIA, FBI, NASA, Air Force, Navy, Army and most of the Fortune 100 companies. He has performed over 300 shows shows in the last few years at Theaters, Hotels, The DCU Center, The Boston Conference and Exhibition Center and more.  Mark hosts an talk show about cosplay on youtube and has many cosplayers as guests.  On-location reports are also covered and many magic videos are also there at https://www.youtube.com/channel/UCgplJ1ssa6D6VRVmJb2Xnew

New addition to BTTF wall. Marty and Doc from BTTF 3
Well. I’m back. Been away from social media for a week. Had a case of extreme, unexplained vertigo every morning. Broke up with girlfriend cause she didn’t want a “relationship” and inherited money from my late uncle. Vertigo now gone. And gonna spend the money on travel. Theater weekend in NYC. Trips to CA and Florida and France. would have taken the girl friend. Oh well
Loading Comments...